The Rigol DG1032Z is a 2 channel Function / Arbitrary Waveform Generator to create high quality signals up to 30 MHz (Sine) with very low jitter (200 ps) and the new SiFi (SIgnal FIdelity) technology. Beside the two analog outputs, the device includes an USB-Host- and an USB-device interface.

The Rigol Function-generators have a sophisticated and easy to use interface and offer multiple functions for all tasks. The menu navigation is very intuitive and all functions and parameters are easy to locate thanks to the graphical interface. 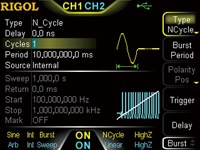 The display with a diagonal size of 8.9 cm (3.5") and a resolution of 320 x 240 pixels can easily display the details from both channels of the device. Both channels feature the full range of functions and can be synchronized phase-dependently. This function turns the device into a true dual-channel generator. 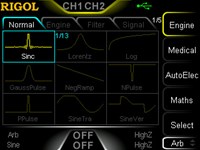 Almost any waveform can be reproduced by using the arbitrary signal generator. Operation of the device is simplified enormously by the 160 pre-defined waveforms. 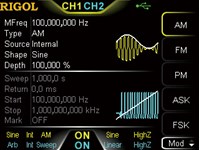 Since the DG1000Z series function generators feature two independent channels which can be synchronized, it is also possible to output analogue and digital waveforms simultaneously. 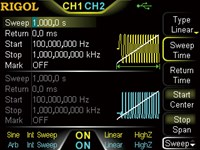 The DG1000Z signal generators can cycle through defined frequency ranges at a constant amplitude and output various basic waveforms at the same time, such as sine, square, ramp, and arbitrary signals. 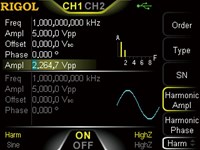 The function generators are able to generate harmonic overtone signals up to the 8th order, with adjustable parameters such as frequency, amplitude, and phase for all frequencies. Even, odd, all, or user-defined harmonics can be generated. 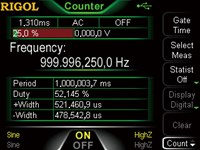 These devices feature a standard high resolution frequency counter. It is able to measure the frequency, period, positive and negative pulse length, and the duty cycle, all at frequencies ranging from 1 µHz to 200 MHz. 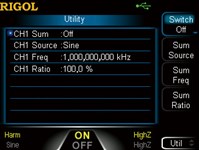 To generate a wide spectrum of waveforms the DG1000Z devices are capable of summing basic waveforms with different signal forms, amplitude ratios and frequencies.

The complete list of technical specifications can be found in the chapter "Specifications" of the Datasheet.

Rigol Software Installation and Use