The SDG7000A are dual-channel arbitrary waveform generators that feature up to 1 GHz bandwidth, a maximum sample rate of 5 GSa/s and 14-bit vertical resolution.

It can generate arbitrary waveforms point by point with a maximum 2.5 GSa/s sample rate and vector signal with a maximum 500 MS/s. It also has the ability to generate a variety of signals such as continuous wave, Pulse, Noise, PRBS patterns, and a 16-bit digital bus.

The Siglent SDG7102A supports the generation of complex signals such as modulation, sweeping, bursting and dual channel copying/coupling/tracking and superposition.

The output are differential/single-ended and support a maximum output range of ± 24 V. The instrument can ensure a large amplitude under high-frequency which eliminates an external power amplifier in some applications and addresses a wider range of requirements.

The SDG7000A series integrates multiple waveform generator functions from DC to continuous waves up to 1 GHz, which can replace RF signal generators in some applications.

Using the benefits of Siglent’s EasyPulse architect ure, a low jitter pulse with a minimum pulse width of 1 ns can be generated. The Siglent SDG7102A also features a Gaussian noise output with adjustable bandwidth, Pseudo random code generation, an optional 16 channels of digital signal output for synthesizing digi tal communications, and much more.

You will find the specifications of the SDG7000A series here.

A variety of analog and digital modulation modes such as AM, FM, PM, FSK, ASK, PSK, DSB SC, and PWM are supported. There are three modulation sources: Internal, External, and Channel.

When a Square/Pulse waveform is generated by traditional DDS, there can be additional jitter if the sample rate is not an integer related multiple of the output frequency. EasyPulse technology successfully overcomes this weakness in DDS designs and helps to produce low jitter Square/Pulse waveforms.

The SDG7000A can generate common modulation types of IQ signals, such as ASK, FSK, PSK, QAM. With the innovative resampl ing technology, excellent EVM performance can be obtained at any symbol rate between 250 S/s ~ 500 MS/s. The built in digital quadrature modulator can modulate the carri er of the IQ signal to any frequency between 0 Hz ~ 1 GHz . The EasyIQ software can be used to generate and edit various types of IQ signals 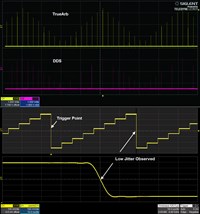 With SIGLENT's TrueArb technology, the generator retains the advantages of DDS technology while overcoming the serious weaknesses of DDS jitter and distortion. Because TrueArb technology generates arbitrary waveform in a point-by-point fashion, every data point is used to generate the output signal which has been stored in memory. Date points will not missed or repeated and arbitrary waveforms possess very low jitter (< 150 ps). It supports any 8 pts ~ 8 Mpts Arb waveform with a sampling rate in a range of 1 μSa/s ~ 75 MSa/s.