The 2- and 4-channel instruments provide bandwidths of 300, 400 and 500MHz, a sampling rate of 4GSa/s and a memory depth of 8MPts. The instruments are rounded off with a standard inclusion of the MSO functionality and several options for serial bus analysis to meet all requirements of modern development designs.

Rohde & Schwarz is offering the new R&S® HMO3000 series exclusively as mixedsignal oscilloscopes. It is also unnecessary to initially activate the mixed-signal functions via software options, as is the case with other suppliers. The low capacitance logic probe R&S® HO3508 (also available as double pack HO3516) is optional. It allows the analysis of up to 16 logic channels with a sampling rate of 1 GSa/s. The logic probe is not linked to a specific instrument serial number. This allows its use with all digital oscilloscope of the R&S® HMO series.

For communications between embedded systems and the environment the Rohde & Schwarz HMOCOMP2 includes hardware-based signal triggering and decoding for all common protocols (I2C, SPI, UART, CAN and LIN). This option can be activated with an upgrade voucher at any time.

The segmented memory option R&S® HOO14 enables you to divide the available memory of your Rohde & Schwarz HMOCOMP2 into up to 1000 segments. This procedure allows sampling rates of 200 000 Wfm/s, which makes it possible to capture rare anomalies occurring during many short events in quick succession. For the analysis of the recorded signals, all measurement functions of the R&S® HMO are available, including the Pass/Fail function.

Thanks to the FFT analysis function with 64 k test points the Rohde & Schwarz HMOCOMP2 keeps pace with significantly larger oscilloscopes also in the frequency domain. The time domain signal, measurement window, FFT analysis result are displayed together on a single screen, which makes it easier to evaluate the input waveform. 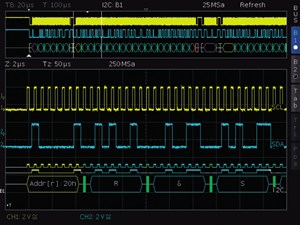 I2C, SPI, CAN or LIN are without a doubt the most frequently used communication protocols when it comes to embedded systems interacting with the outside world. The R&S®HMO3000 oscilloscopes offer hardware-based signal triggering and decoding for all of these protocols. Customers can upgrade their instruments via software license keys with the functions they need to develop their application. 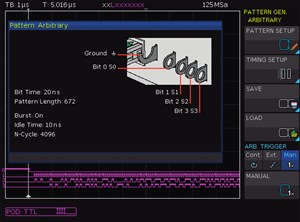 Are you working in a distributed project, and the interface definition has been completed but the prototype hardware has yet to be implemented? The pattern generator includes a tool for user programmable 4-bit bus signals that allows you, for example, to emulate a sensor signal in order to continue your work. - Generate protocol messages at speeds of up to 50 Mbit/s - Use predefi ned signal patterns: I2C, SPI, UART, CAN, LIN - Create your own patterns tailored to your needs, or modify the predefined signal patterns 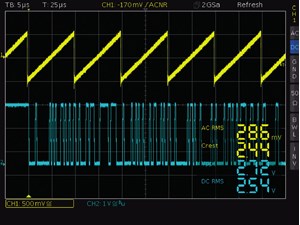 The three-digit digital voltmeter is another standard feature that is particularly useful for service technicians. Voltage measurements can be performed simultaneously for both analog channels. Integrated into a single compact device, it helps you keep your workplace tidy., - Simultaneous measurements on both analog channels, with two user-definable parameters each - Available options: DC, AC + DCRMS, crest factor, Vpp, Vp+, Vp– - You determine the position of the values on the screen 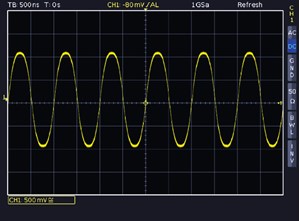 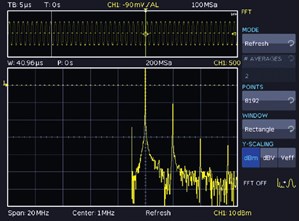 Due to the high-performance FFT functionality of the R&S®HMO oscilloscopes, signals can also be analyzed in the frequency domain with up to 128,000 points. Other practical tools include cursor measurements and detection of signal peaks. Development engineers can complete their analysis significantly faster, even in the frequency domain.

You will find the specifications of the HMO3000 series here.