With a sampling rate of up to 2.5 Gsample/s and a memory depth of up to 20 Msample, the Rohde & Schwarz RTB2K-204M oscilloscope excels in its class. A waveform update rate of more than 50 000 waveforms/s ensures a responsive instrument that reliably catches signal faults. Included standard tools provide quick results, e.g. QuickMeas, mask tests, FFT, math, cursors and automatic measurements, mincluding statistics. 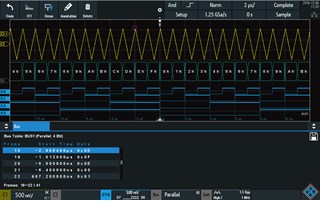 The R&S®RTB-B1 option turns every Rohde & Schwarz RTB2K-204M into an intuitive-to-use MSO with 16 additional digital channels. The oscilloscope captures and analyzes signals from analog and digital components of an embedded design – synchronously and timecorrelated to each other. For example, the delay between input and output of an A/D converter can conveniently be determined using the cursor measurements. 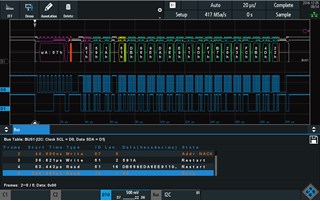 Protocols such as I2C, SPI and CAN/LIN frequently transfer control messages between integrated circuits. The Rohde & Schwarz RTB2K-204M has versatile options for protocol-specific triggering and decoding of serial interfaces. Selective acquisition and analysis of relevant events and data is possible. With the hardware-based implementation, smooth operation and a high update rate is ensured even for long acquisitions. This is advantageous, for example, to capture multiple packetized serial bus signals. 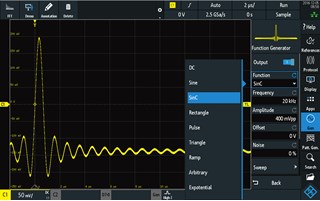 The integrated R&S®RTB-B6 waveform and pattern generator up to 50 Mbit/s is useful for educational purposes and for implementing prototype hardware. Apart from the common sine, square/pulse, ramp and noise waveforms, it outputs arbitrary waveforms and 4-bit signal patterns. Waveforms and patterns can be imported as CSV files or copied from oscilloscope waveforms. Before playing signals back, the user can preview them to quickly check signal correctness. Predefined patterns for e.g. I2C, SPI, UART and CAN/LIN can be used. 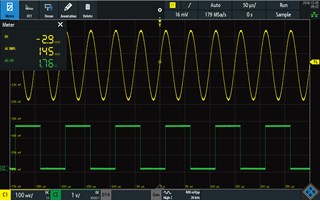 The Rohde & Schwarz RTB2K-204M features a three-digit voltmeter (DVM) and sixdigit frequency counter on each channel for simultaneous measurements. Measurement functions include DC, AC+DCRMS and ACRMS – included in scope of delivery. 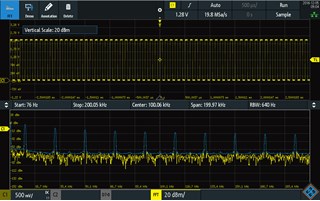 Difficult-to-find faults often result from the interaction between time and frequency signals. The FFT function of the Rohde & Schwarz RTB2K-204M is activated with the push on a button and by just entering center frequency and span. Due to the high-performance FFT functionality of the Rohde & Schwarz RTB2K-204M oscilloscopes, signals can be analyzed with up to 128k point. Other practical tools include cursor measurements and autoset in frequency domain. 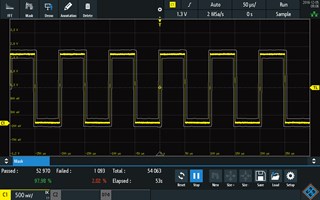 Mask tests quickly reveal whether a specific signal lies within defined tolerance limits. By using statistical pass/fail evaluation, they assess quality and stability of a DUT. Signal anomalies and unexpected results are quickly identified. When the mask is violated, the measurement stops. Each violation can generate a pulse output at the AUX-OUT connector on the Rohde & Schwarz RTB2K-204M. This pulse output can be used to trigger actions in the measurement setup. 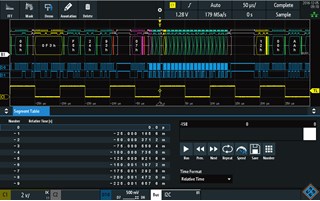